Coffee and Community: Then and Now 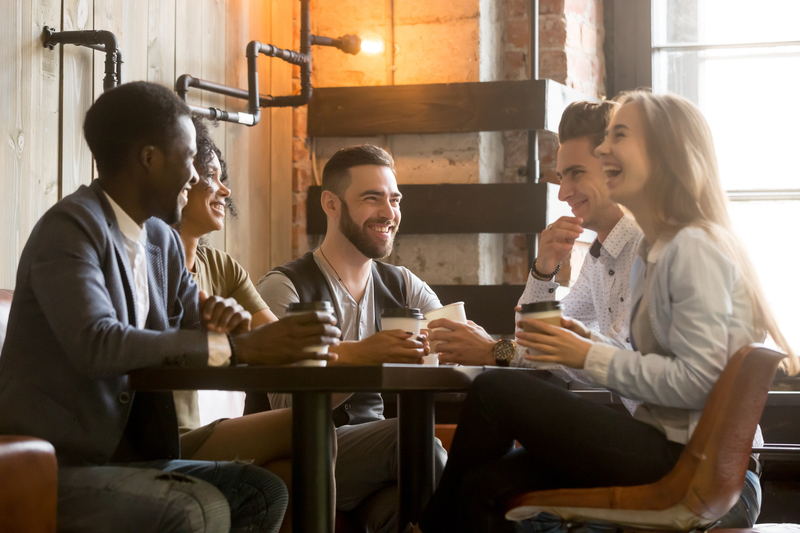 The Appeal of the Coffeehouse Coffee brings people together. Why did it become a centerpiece of social interaction? The experts at the National Coffee Association tell us roughly when it happened, during the 16th century in the Near East. While it’s not exactly clear what led to the inception of qahveh khaneh, the early coffeehouses, what’s intriguing is that typical activities in today’s coffeehouses—like a game of chess or a patron oblivious to all but a book—also took place way back then. So what else goes on in coffeehouses? They’re not only a means for enjoying a popular drink but also a gathering place for good, clean fun. Coffee offers a drink for everyone: regular brew, espresso, and the latte in all its various forms, in addition to decaf versions of most drinks. Plus it has numerous health benefits. At coffeehouses you’ll often find examples of humanity’s brightest spots: small children excitedly sipping hot chocolate topped with whipped cream, songwriters sharing the music that moves them, college students passionately discussing how they’ll change the world, organizations spreading the word of goodwill. Coffee’s Effect on Changing Neighborhoods All of the above set the stage for a double shot of good vibes. However, the coffeehouse isn’t without controversy. Over the last decade, a new word has become tied to the world’s favorite drink: gentrification, which is, in short, a process of revitalizing a low-income neighborhood or area so that it matches the middle-class lifestyle. For some people, this evolution signals the onset of challenges for people living in those neighborhoods. This informative article discusses the highs and lows of coffee culture, with particular insight into negative perceptions of gentrification: “Though coffee’s long been an affordable drink for the masses, coffee shops have—for just as long—appealed primarily to the leisure class.” It also says research has shown that once a coffeehouse pops up in a low-income area, higher rents and other associated costs are around the corner. In contrast to the gentrification debate are examples of coffeehouses getting creative in order to better serve their communities. Two businesses on opposite ends of the country have zoned in on a particular need: an environment favorable to families with little ones. At Playgrounds Cafe in Ohio and Playgrounds Fun Zone and Cafe in Arizona (not affiliated with each other), it’s all about families. Each has an area designed to entertain and inspire children, allowing parents or caregivers to sit within eyesight and relax with a cup of joe. Coffeeshops like these are popping up all over – there may even be one near you. Here at Coletti, we’re a small team who love the way coffee represents so many positive aspects of our daily lives and of humanity as a whole. In fact, our founders’ mission, as you might already know, is to prevent a terrible tragedy happening in communities all over the world, human trafficking. By purchasing our products, you can aid in this crucial mission. Join in the fight!]]>